2008 was a banner year for the second-year Vikings running back as he led the NFL in rushing and set a new Vikings single-season record with 1760 rushing yards. 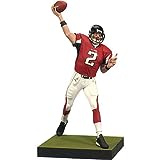 The Falcons quarterback was named the AP NFL Offensive Rookie of the year by completing 265 of 434 passes for 3340 yards and 16 touchdowns. He became the first rookie quarterback to start all 16 games and lead his team to the playoffs.